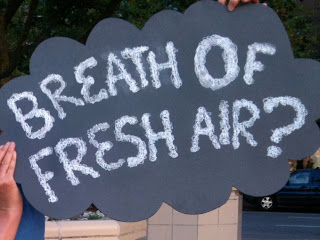 This age old argument to protect the status quo just doesn’t stack up.  In “free market” America, companies shed jobs and move to other countries because of the economy, not environmental protection demands.  According to a September 2009 article in The Oregonian The Ash Grove Cement Kiln in Durkee, Oregon reduced production not because of long overdue threats to limit the toxic mercury emissions from one of the largest sources in the nation, but because global demand for asphalt has dropped significantly during the course of the great recession.

But in Europe, they seem to be able to choose both the environment and jobs.  In a fascinating March 2010 essay published in Harper’s Magazine on Germany’s labor structure, Thomas Geoghegan notes: “a strange fact: since 2003, it’s not China but Germany, that colossus of European socialism, that has either led the world in export sales or at least been tied for first. Even as we in the United States fall more deeply into the clutches of our foreign creditors—China foremost among them—Germany has somehow managed to create a high-wage, unionized economy without shipping all its jobs abroad or creating a massive trade deficit, or any trade deficit at all.” Or, BP-scale environmental destruction. Maybe America is Europe’s China–companies come over here to get away with what they can’t on their own soil.

It is universally recognized that Germany, and the European Environmental Council, in adopting the Precautionary Principle nearly a decade ago, also get environmental regulation right:  Polluters need to prove they do no harm before they are allowed to impose their toxic outputs into our lives.  We have the opportunity to de-incentify cheap environmentally destructive business models.  We can enact things like “polluter pays” regulations being supported by our own Earl Blumenauer.  We can enact what I would like to say is the “Common Sense” principle.  We know things like heavy metals are dangerous to our health, and devastating to our children’s development, and they will most likely cause irreparable damage that may not be seen for decades, and we know the sources of these emissions.  Let’s stop it.

In response to our demands, Andy Ginsburg has said the state will begin to look at addressing short-term benchmarks for air toxics.  The work won’t even begin until mid-2011.  It has taken the state 10 years to drag itself to this point.  This does not have to be this way.  The Clean Air Act already affords the state the discretion it needs to safeguard public health by more stringent emissions controls and pollution reduction policy. It can write rules today about known heavy metal toxins they measured years ago from identified sources. The state agency can put public health above the needs of the regulated community.

Get NCA updates delivered to your inbox.